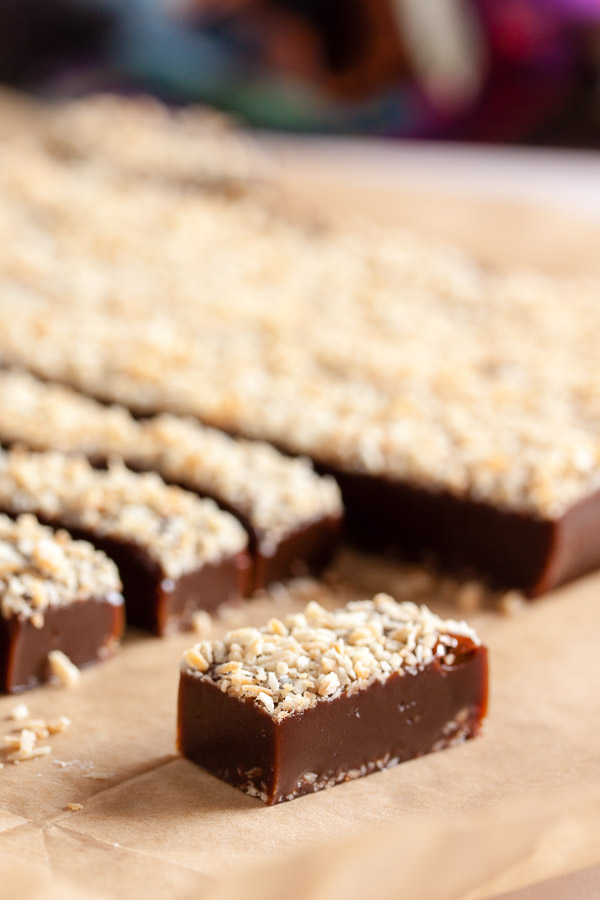 Last week I made some coconut caramels (reeeeeally good), and I had some cream left over so of course I had to make some more, right? I had to use it up – I had no choice. I was initially going to make something completely different (I had my eye on some orange espresso caramels, but I didn’t have any candied orange peel and no time to make it), so I ended up making these chocolate coconut caramels. Too much coconut? Is there such a thing? I figured the fact that they’re chocolate would be enough of a difference. And I like coconut; and since I’m the one making them, I get to choose. Right? Right. 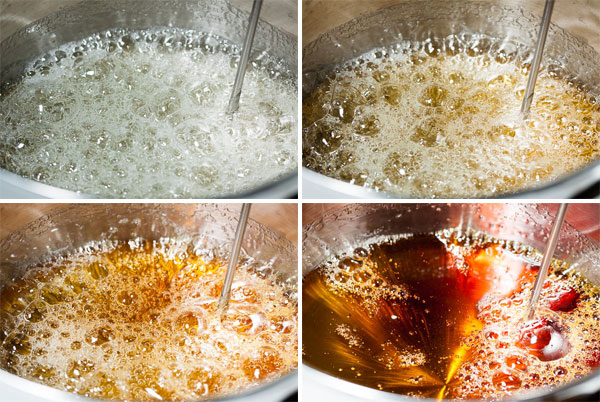 For the coconut caramels, I tried a different cooking technique where the sugar is caramelized on its own before combining with the other ingredients (you may have seen recipes where the sugar is heated separately, but I’ve never before seen it heated to the point where it’s actually caramelized). I had some issues with crystallization and was wondering whether that technique would still work if I added the corn syrup at the same time (corn syrup helps to prevent that re-crystallization). So for this recipe, while I used the ingredients and quantities as written, I threw the instructions out the window and did a mash-up of last week’s recipe and this one. 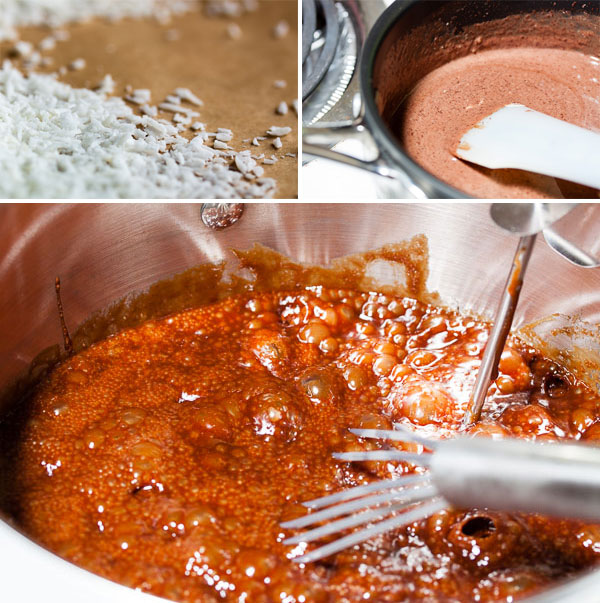 This recipe originally called for the sugar and corn syrup to be heated to just 248°F before adding to the other ingredients. I wanted to get that deep caramelization that I did last week, so instead I heated it all the way up to the point that it turned amber-coloured and began to smoke a bit – this is something I learned at a caramel making course I took awhile ago, and David Lebovitz offers similar advice on his site regarding caramelizing sugar.

Last week when I made the coconut caramels, I didn’t use a thermometer at this point so I didn’t know how hot the sugar actually got. This time I measured it, and it got almost up to 350°F. Yowza! Most caramel recipes instruct to heat the sugar to somewhere between 245°F and 320°F. 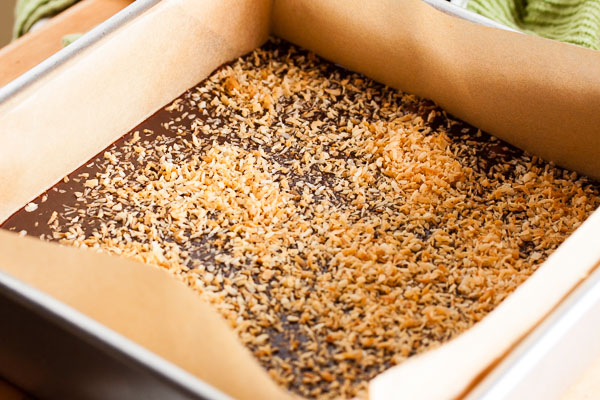 Now the second heating step is something you can’t play around with too much. If you cook it too low, the caramels won’t set up, and if you cook it too high, the caramels will be too hard. There’s a bit of wiggle room, and things like elevation and humidity can have an affect so you may need to adjust what the recipe says (just by a degree or two). It’s generally really humid here in Vancouver, so I’ll usually cook my caramels to a couple degrees more than what’s called for – the coconut caramels I made last week came off the heat at about 247°F and they’re a little on the soft side for me – they hold their shape once cut, but get a bit squishy in the wrapper. This week’s caramels cooked to a little over 248°F and they’re holding their shape beautifully, but aren’t too firm to chew. 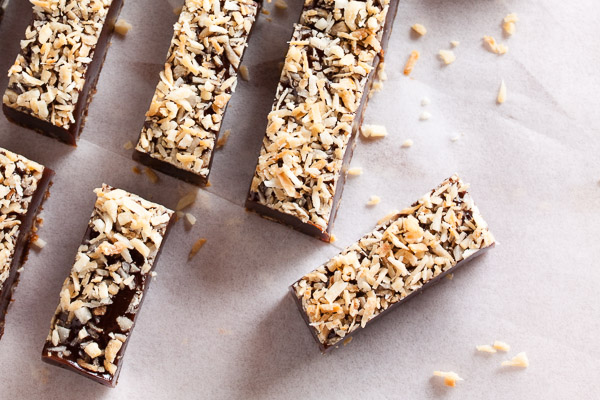 If you prefer a sweeter caramel? That’s totally fine (it’s all a matter of taste!) – just go ahead and cut down the initial cooking time for the sugar. Personally, I prefer things less sweet, so this is right up my alley. And it’s not just me – I’m getting a lot of compliments and yummy noises from people trying these caramels. Again, there’s no right or wrong here – it’s just what tastes good to you. 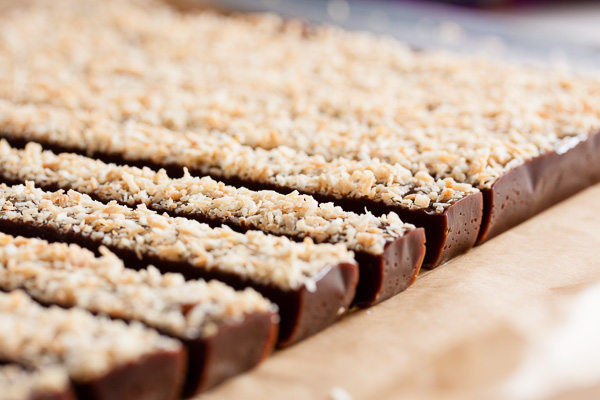 The chocolate in these caramels pairs perfectly with the toasted coconut (yum!), but the flavour is so good they’d be great without the coconut too. You could sprinkle a little fleur de sel on top for an even more grown-up taste. I made a salted chocolate caramel last year that I’d tagged as a favourite, but this recipe is bumping that spot. I’m not sure whether it’s the recipe or the different cooking technique, but this? This is my new favourite chocolate caramel recipe. 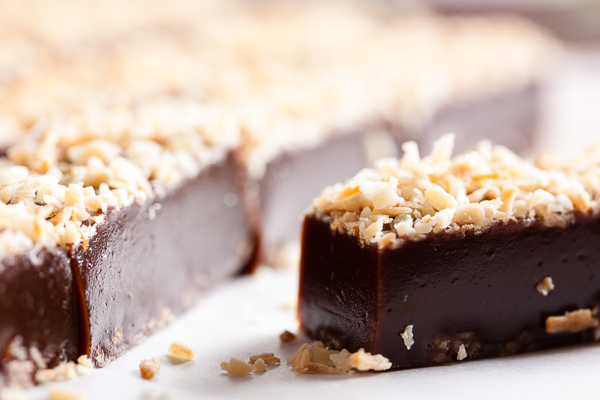 To toast the coconut, heat your oven to 300°F. Spread your coconut in a thin layer on a baking sheet and place in the oven. Stir every few minutes to ensure it browns evenly. Once it's a lovely golden colour (but not too dark), remove from the oven and set aside until you're ready to add it to the caramels. It shouldn't take more than 20 minutes to toast – mine was ready in about 10. Be sure to keep an eye on it as it can burn quickly.

Line an 8" square pan with parchment paper. If you don't have one, a 9" square will work, but the caramels will be a bit flatter. There's no need to oil the parchment as the caramels shouldn't stick. Spread half of the toasted coconut in the bottom of the pan. Set aside.

Combine the cream and vanilla extract in a medium-sized saucepan and heat until scalding. Remove from the heat, add the chopped chocolate and allow to sit for a minute. Stir the chocolate until it has completely melted and the mixture is smooth, and then set aside (you've essentially made a ganache here).

Combine the sugar, corn syrup, and water in this large saucepan and heat over medium heat until the sugar has melted. Raise heat to high and bring to a boil. Using a pastry brush and some cold water, brush down the sides of the pot to ensure any sugar crystals that may be clinging to the edge are melted. Alternately, you could put the lid on the pot and let it boil for a couple minutes covered – the steam that builds up under the lid will also melt away the sugar crystals. Do not stir the sugar at this point. Stirring may cause recrystallization. Instead, just gently swirl the pan a few times.

Continue to cook the sugar until it's amber coloured and it begins to give off a bit of smoke – the bubbles should have reduced in size by this point too. Remove the pot from the burner and allow to sit and continue to caramelize off-heat until desired level of caramelization is reached. A lighter colour will give you a sweeter caramel, while a darker colour will give you a more bitter caramel. It's totally a matter of taste (I cooked mine to about the colour of a shiny penny).

Once you're happy with the colour, pour the cream mixture into the sugar and add your thermometer to the pot. Bring to a boil and add the butter.

Continue cooking over high heat, whisking constantly until it reaches 248°F. Normally I'll cook my caramels to a slightly higher temperature because the humidity is usually quite high in Vancouver, but 248°F worked perfectly for me.

Remove from the heat and stir in the salt. Pour the mixture into your pan – carefully, it's very hot. Don't scrape the bottom or sides of the pot in case there are some hard bits (I scraped this stuff off onto a separate piece of parchment for myself). Sprinkle the remaining coconut on top.