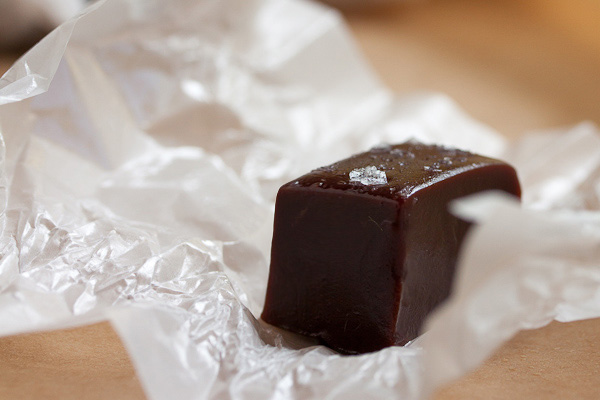 I’m not a big fan of sugary things – shut up, chocolate doesn’t count. I mean, it’s not that I don’t love cookies & cakes and things, but sugary candies? Nah. No thanks. Occasionally I’ll get a craving and will buy a small bag of jelly bellies; but then I’ll eat one or two and forget about the bag until I find it in a drawer a year later. Chocolate? Yeah, that won’t last a day. But if I’m offered a candy, I’ll pass.

Caramel kinda falls in between for me, especially salted caramels. They have richer flavour, not so much sugary sweet. But still, I can usually take them or leave them. This recipe? Oh boy, I’m in trouble. I could eat the whole pan by myself. The chocolate flavour is strong, almost bitter, but it has that deep caramel flavour as well. Topped off with a bit of fleur de sel? Yeah, I’m hooked. I can see myself making this recipe a LOT. 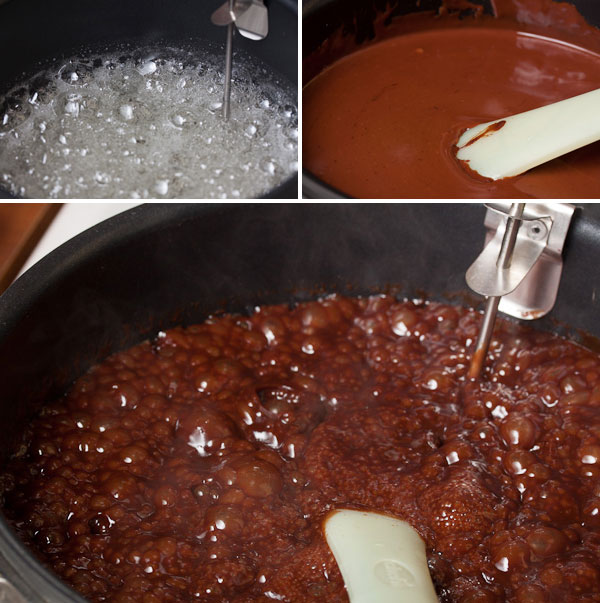 Be careful when you heat the cream. Once it comes to a boil, it can boil over quickly. I mean, don’t get distracted prepping your other ingredients and let it boil over all over the element and into the stove, and then try to top it up with some whole milk… or something like that… not that that’s what I did… Okay, yes, I ended up making this recipe twice. The first time wasn’t great. The flavour was good, but it set up far too hard – my attempted rescue with whole milk wasn’t successful (I knew it was a risk). I ended up salvaging it by reheating it and cooking it again with additional milk but to a lower temperature. It’s a bit soft, but definitely still good. This pan I’ll keep for myself.

I wanted to make it again properly, though. The second batch? Perfect. 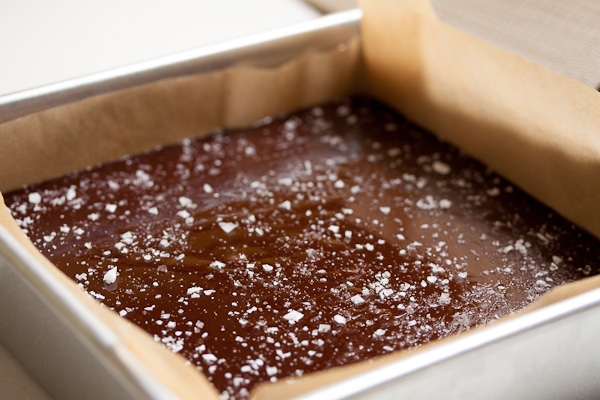 Reading the reviews over at Epicurious, people had wildly varying results with this recipe. Some had it set up rock hard, others had it not set up hard enough. Some had it stick to the parchment. I think caramels are just really finicky – you need the right combination of sugars and fats and temperature to get the correct results. Even the weather can affect it. If you do any substitutions, or if your thermometer isn’t accurate, it can be a bit of a crapshoot.

The ingredients you buy can have an effect too. Not all creams have the same fat content. Same for butters. European butters have a higher percentage of butterfat than American, for example. The higher the fat content in your recipe, the softer the caramel will be (which is why when I added whole milk to replace the missing cream, it ended up too hard).

And if you google, you’ll easily find recipes with instructions to heat anywhere from 230°F to 260°F – probably because they contain varying amounts of cream or fat. See? Tricky. 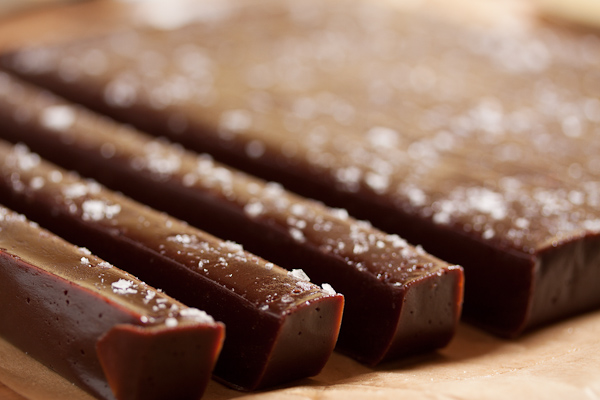 But seriously, if you’ve never made caramels before, don’t be scared off. What’s the worst that can happen? Your caramel is too soft? Keep it in the fridge or mix it in with some ice cream. Too hard? Well, you can chop it up into small chunks and use it in cookies, or you can try what I did and melt it down again – although I’ve read that a lot of people don’t have luck with this method. But it’s worth a shot. If you can’t get it to set up the way you want, turn it into a sauce and have it with brownies or ice cream. And it’s a learning experience. If you can’t salvage it? Try it again from scratch and adjust your temperature a bit. 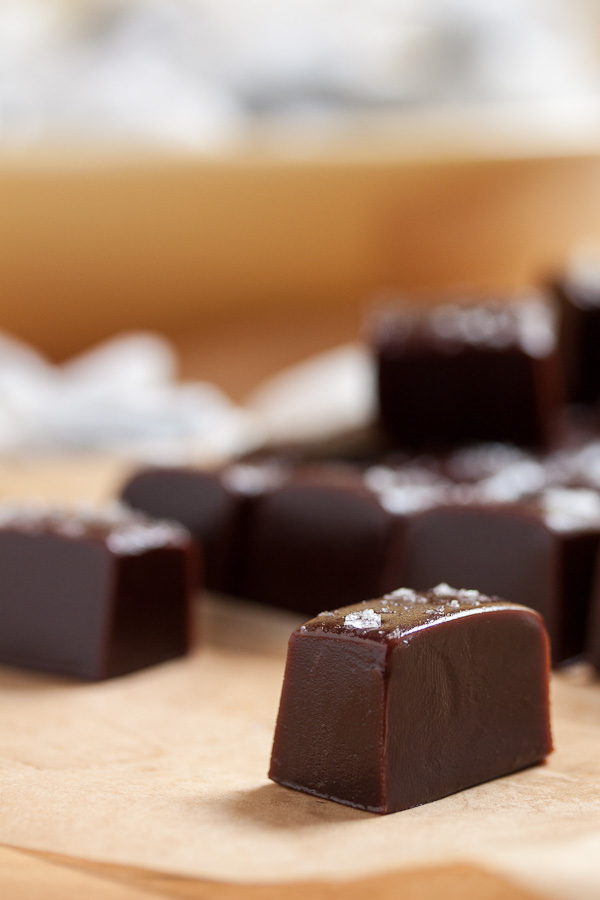 There’s a great post over at Science Fare about making caramels that gets into all the nitty gritty. She made a batch and saved samples at varying temperatures to find out how to achieve the ideal consistency. I thought that was brilliant. Of course, keep in mind that her results are only valid for that particular recipe using her particular ingredients. One of the reviewers on Epicurious did something similar, heating to the stated temperature of this recipe, but also saving samples along the way so if the caramels set too hard they’d know what temperature to heat them to the next time. I’m going to steal that idea. 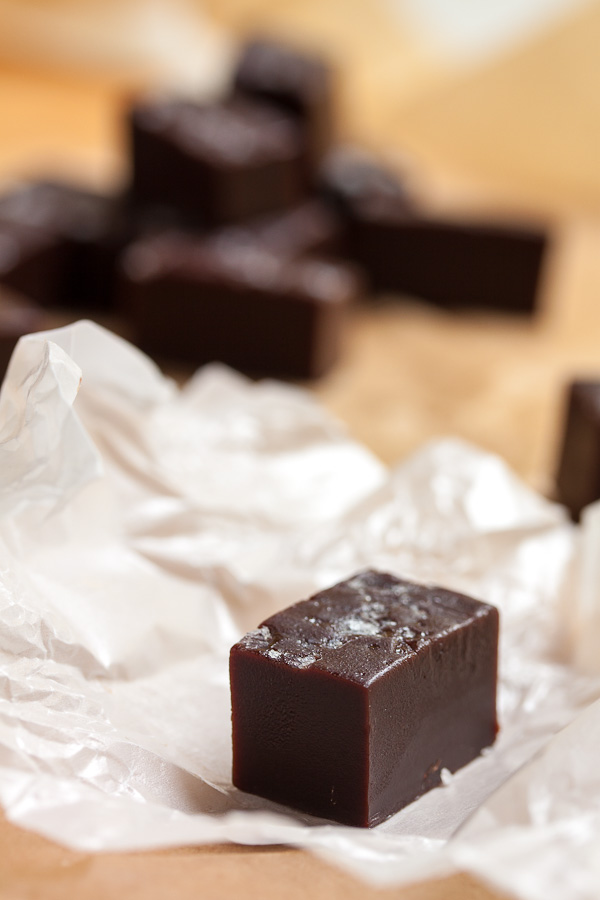 I found this recipe on Smitten Kitchen, but it's originally from Epicurious. Like Deb, I used a 72% chocolate rather than the stated 60% - I'm pretty sure this stipulation isn't about flavour but about fat content in the recipe. Luckily, it worked out. And tastes great! Note: when cooking sugar, subtract 2°F from the target temperature for every 1000 ft above sea level.

Line an 8" or 9" square baking pan with parchment paper. There's no need to oil it – the caramel should be buttery enough that it won't stick. I used an 8" pan this time, but I think I'll use a 9" pan next time around to get a slightly shorter caramel.

Carefully heat the cream in a small saucepan until it comes to a boil. Reduce the heat to low and add the chocolate. Let sit for a minute, then stir to combine to a smooth consistency. Keep on low heat while the sugar heats.

Choose a large heavy-weight saucepan to cook your caramel in – it needs to be large enough to accommodate the bubbling up that will happen (it will bubble up a lot), but deep is better than wide so your thermometer will be covered by enough volume to register an accurate temperature (most digital thermometers have a guideline indicating minimum depth).

Fit your thermometer in the saucepan; combine the sugar, corn syrup, water and salt and cook over moderate heat (I used a setting just slightly over halfway on my stove). Bring to a boil, and continue to cook for about 10 minutes. According to other similar recipes I've worked with, you want to cook the sugar to somewhere between 250°F and 325°F at this stage. Cooking for 10 minutes at medium heat worked out to about 295°F for me. Do not stir the sugar at this point. Stirring may cause recrystalization and you'll end up with a grainy caramel. Instead, just gently swirl the pan a few times.

Add the cream/chocolate mixture gradually, in 3 or 4 portions. Stir well after each addition. It will bubble up a lot. Continue to cook, stirring frequently, until the thermometer reads 255°F. This temperature gave me a nice soft chewy caramel that was firm enough to hold its shape.

Remove from heat and add the butter. Stir well until the butter is completely melted and combined, then pour the mixture into your pan – carefully, it's very hot. Don't scrape the bottom or sides of the pot in case there are some hard bits (I scraped this stuff off onto a separate piece of parchment for myself). Allow to sit about 10 minutes, and then top with the fleur de sel.

Allow to sit for at least 2 hours before cutting (preferably overnight). If it's still a bit soft, try refrigerating for about an hour first. The instructions on the original recipe said to lightly coat your knife with vegetable oil to avoid sticking, but I found it unnecessary. Be sure to use a very sharp knife.

If you like, you can wrap the caramels in squares of parchment paper or wax paper. If you're lazy like me, you can buy them pre-cut. 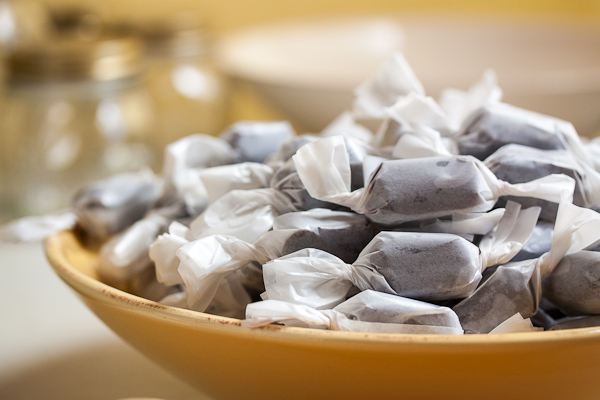