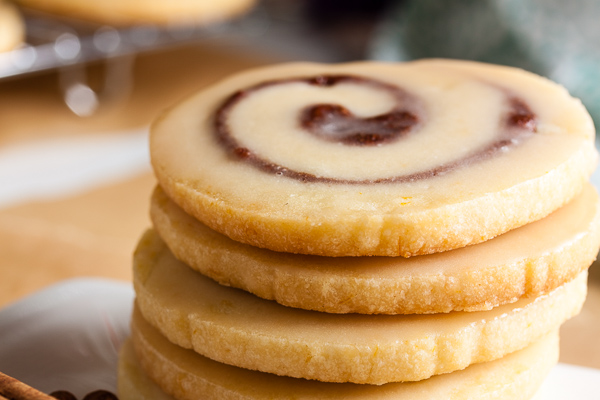 I’m almost embarrassed to admit this, but this is the first time I’ve ever made a pinwheel cookie. Honestly, I’m not sure I’ve ever even eaten one before! But every time I see a picture of one online or in one of my cookbooks, I just think “oooh, how pretty!” And even after reading recipes and techniques (and yes, I even watched a couple YouTube videos before attempting), I had this idea that they must be so complicated to make. Nope. If you can roll out dough, you can make a pinwheel cookie. 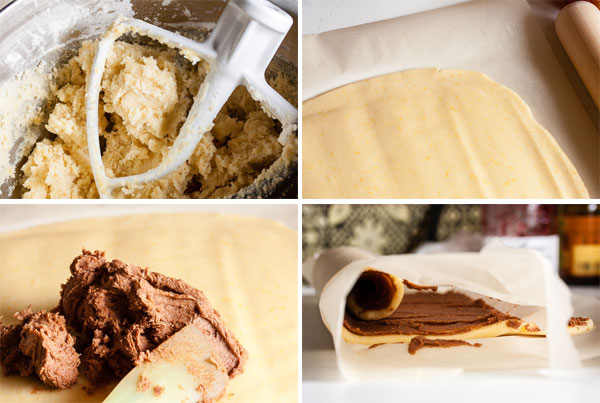 This cookie caught my eye the first time I paged through this cookbook, so I flagged it with a post-it and it’s been in the back of my mind ever since. But if you look at my cookbook shelf, you’ll see a lot of little flags sticking out of the pages. So many cookies, so little time… *sigh*

Unfortunately, this is yet another recipe where the picture in the book and the instructions don’t quite jive. According to the recipe, the dough is to be rolled out to approximately 12″ square. Mine was pretty close to that, maybe even a little larger, and you can see I only got a few spirals in the finished cookie. The photo in the book, however, has several spirals, and the dough layer is much thinner than mine. Next time I make these (oh yes, there will be a next time), I’ll roll it thinner – maybe even twice as much. Flavour-wise, there is absolutely nothing wrong with this cookie, but I think it would look much prettier with more spirals. That is, in fact, what drew me to this cookie in the first place. 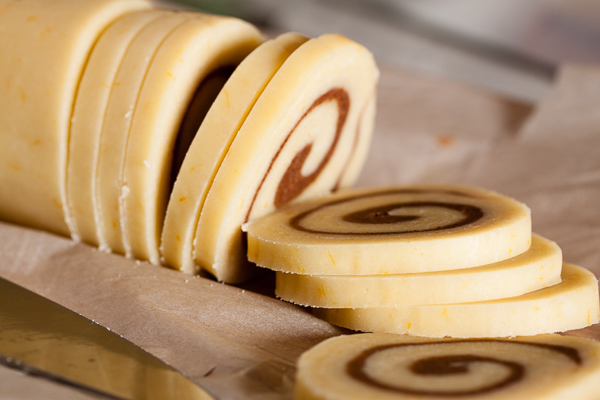 This dough is great to work with. Not sticky at all, but soft and pliable. It rolled out really easily, so getting it thinner should be absolutely no problem.

The cinnamon mixture turned out a bit thick and tough to work with, but I’m going to blame that on how cold it was in my kitchen – in a warmer kitchen, the butter would be softer and easier to spread. It probably would have worked out better if I’d softened it a bit in the microwave rather than simply counting on the room temperature to do it. 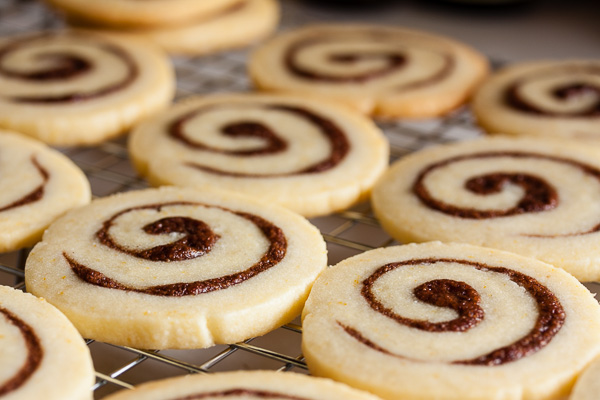 The cookie spreads slightly in the oven, and flattens out a tiny bit, but overall holds its shape well. But the cinnamon layer bubbles up and oozes out of the spiral, making it look even more like a cinnamon bun. So pretty.

Using the proportions in the recipe, the glaze was much too thick for me to brush on – I could have maybe spread it on with a knife, but that’s not the effect we’re going for here. I thinned it with a bit more water and it was fine. Although I ran out for the last few and had to whip up a bit more. It seemed like a lot of glaze at first, but when they say to brush on a “thin layer” they really mean “thin”. Oops. 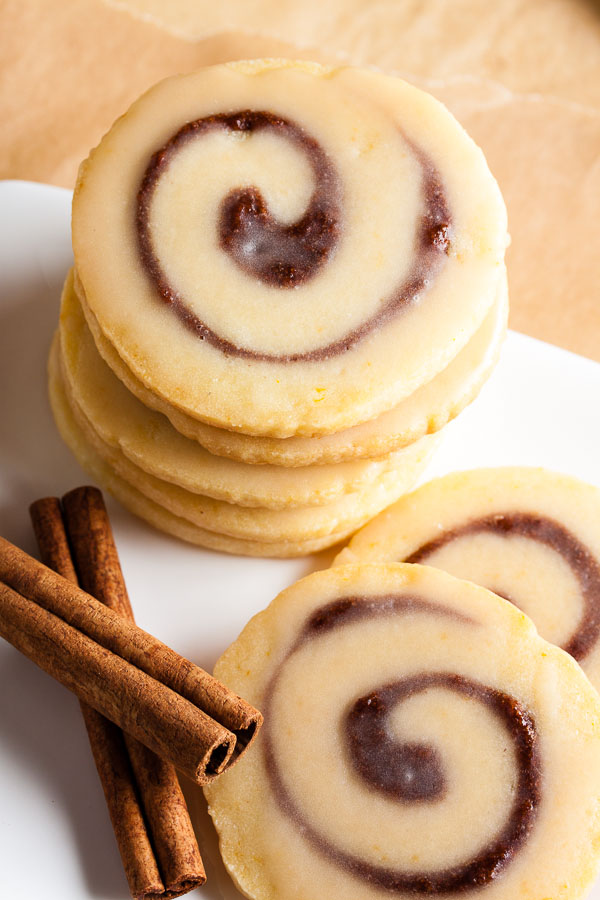 Prior to adding the glaze, the cookie has a more subtle flavour. It’s okay, but in my opinion, the glaze adds a touch of extra sweetness that the cookie needs. It doesn’t overpower the cinnamon, but makes the cookie taste more like its namesake. The cookie has a bit of crunch, but is overall soft and tender. One of my coworkers declared this cookie “life-changing”. I think he may have been exaggerating slightly, but he’s adamant that I make more. I tried just one of these immediately after I made them, and yes, it was a good cookie, but I couldn’t figure out why he thought they were so great. And then I had another. OMG, I don’t know if my tastebuds just weren’t picking up on it the first time or these cookies needed a day or two for the flavour to mature, but this is a good cookie.

This is only the second recipe I’ve tried from this cookbook, and they’ve both landed among my all-time favourites. I have very high hopes for the rest of this book! 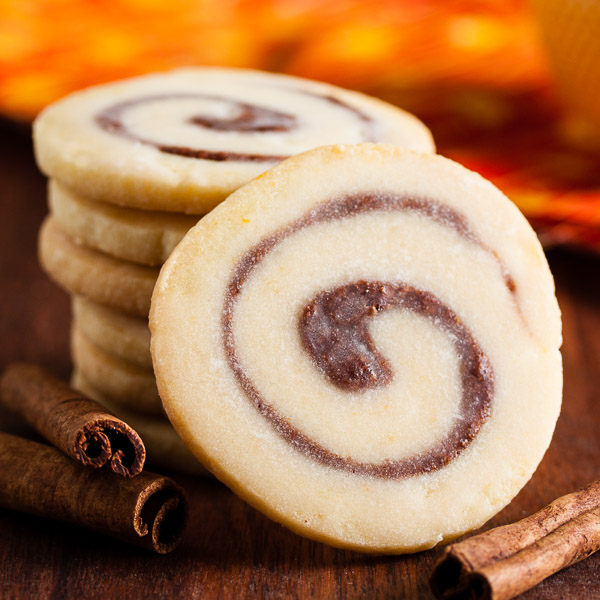 Adapted from Cookies at Home with The Culinary Institute of America by Todd Knaster. If you roll your dough out exactly 12", and slice your cookies exactly 1/4", you'll get 48 cookies out of this recipe. I wasn't quite that precise, and got 43 cookies. Close enough.

for the cinnamon smear

In the bowl of a stand mixer fitted with the paddle attachment, beat the butter, sugars, salt, zest, and vanilla together on medium speed until light and fluffy, about 3 or 4 minutes. Scrape down the sides of the bowl and add the egg, beating well to incorporate.

Turn the mixer down to low and add the flour, mixing until just barely combined.

On a sheet of wax or parchment paper (whatever your preference), roll the dough out to approximately 12" square (or more if you want to get more spirals – see my comment above). When it comes time to roll into a log, the paper makes it easier to lift the edge and handle the dough.

In the bowl of a stand mixer fitted with the paddle attachment, combine all of the cinnamon smear ingredients and beat on medium speed until light and fluffy, about 2 or 3 minutes.

Spread the cinnamon mixture on top of the rolled out cookie dough.

Roll the dough into a log shape. Once you get an edge started rolling by just folding it over slightly, you can simply lift the paper edge and use it to guide the dough to continue rolling. There's a video here that shows what I mean about lifting the paper edge to create the roll. The ends of the log will likely be a bit gappy, so you can just smoosh them in to form a flat edge. The first slice from each end will not have the pretty spiral, but there won't be any wasted dough.

Wrap the log in plastic wrap or the parchment paper you used to roll it out and gently squeeze the log to ensure there are no air pockets inside. You can then roll the log a few times to smooth it back out if necessary.

Transfer the dough to the freezer for at least 15-20 minutes, until firm.

Remove the dough log from the freezer and using a sharp knife, cut the dough into 1/4" slices. Give the log a quarter roll after each cut so it doesn't develop a flat edge from constantly pressing on the same side.

Transfer the cut slices to your prepared cookie sheets and bake for about 12-14 minutes, rotating the baking sheet halfway through, until they’re lightly golden around the edges. Allow to cool on a wire rack for a few minutes before removing the cookies from the pan and allowing them to cool completely.

Combine all the ingredients for the glaze in a small bowl and whisk together. Add additional water if it seems too thick. Using a pastry brush, apply a thin coat to the top of each cookie. Allow to sit at room temperature to dry completely.