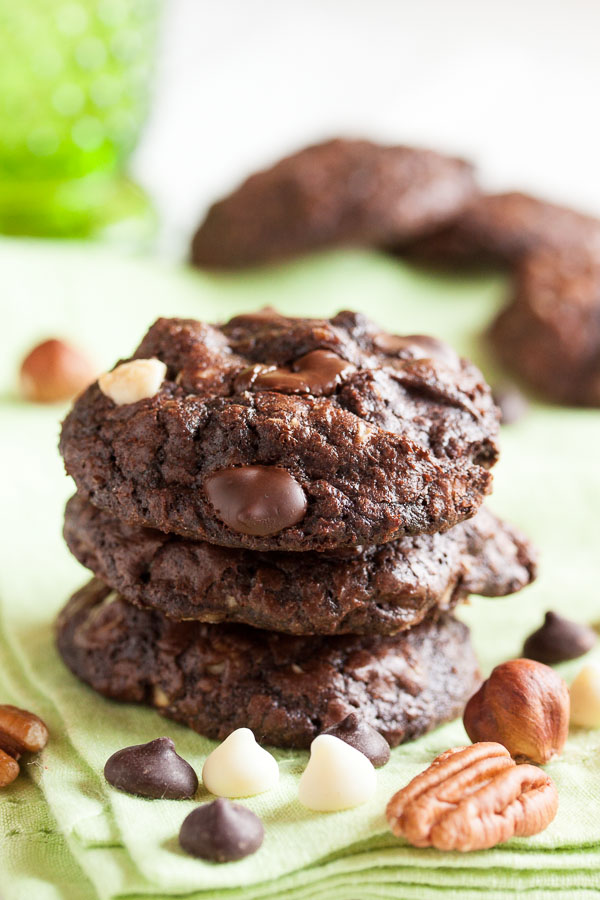 Let me start off by saying omg, this is a good cookie. I was tempted to double this recipe when I saw it only had 1 cup of flour – that seems like a pretty small recipe when compared to what I usually make. But then I saw all the other stuff in there and changed my mind. Good thing too. Because while the original recipe says it will only make 2 dozen cookies, those cookies are humongous, made with 1/4 cup of dough each. I made them smaller (as I always do) and got a very respectable 65 cookies. But they were so good, they didn’t last long in the cookie jar.  END_OF_DOCUMENT_TOKEN_TO_BE_REPLACED 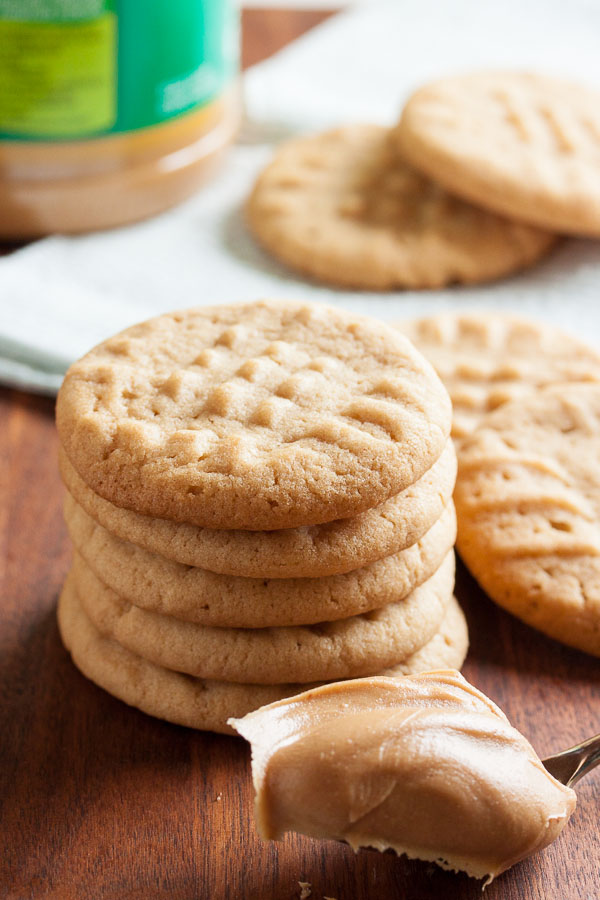 I’m sure we’ve all had kitchen sink cookies – those cookies that you just throw a little of everything into, that end up with a variety of flavours and textures. I’m a big fan. I’ve certainly made them, and I even favourited the last ones I made (delicious chocolate kitchen sink cookies). Well guess what. I’m favouriting this recipe too. It may not look like much, but this is a good cookie.   END_OF_DOCUMENT_TOKEN_TO_BE_REPLACED 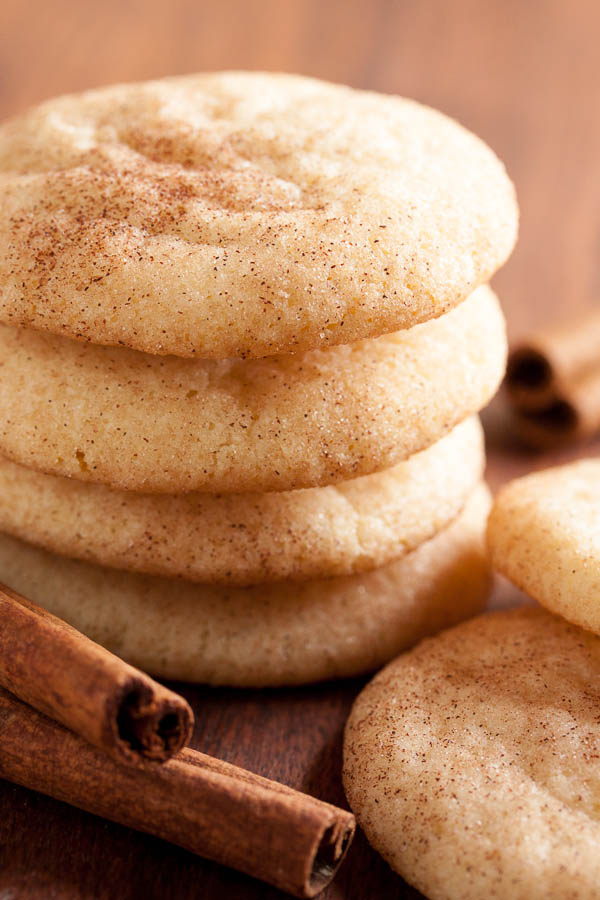 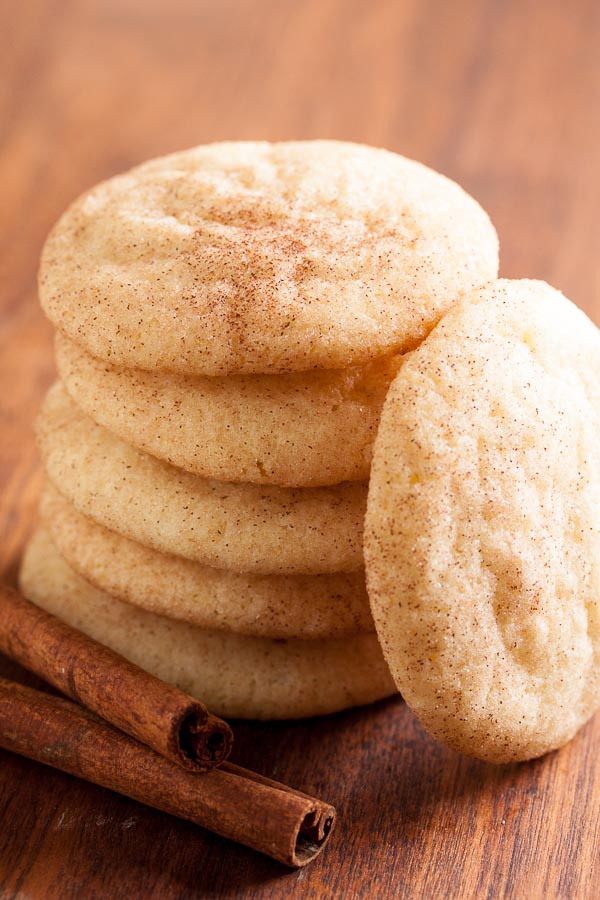 For a classic cookie, it’s surprising that the only snickerdoodles I’ve ever eaten are the ones I’ve made myself. Are they just not a thing up here in Canada? I’ve made a few different recipes over the years – what I thought was a classic snickerdoodle, snickerdoodles with molasses and nutmeg added, and even an oatmeal snickerdoodle. So what makes this particular cookie worthy of the name “old-fashioned snickerdoodle”? While all the others were certainly delicious, all were made with baking powder, rather than the combination of baking soda and cream of tartar that is what apparently makes a proper snickerdoodle cookie. I would have thought they’d behave basically the same way, as baking powder is essentially baking soda with an acid added. But upon further googling and reading, apparently the cream of tartar adds a certain tanginess to these cookies that’s missing when you just use baking powder.  END_OF_DOCUMENT_TOKEN_TO_BE_REPLACED 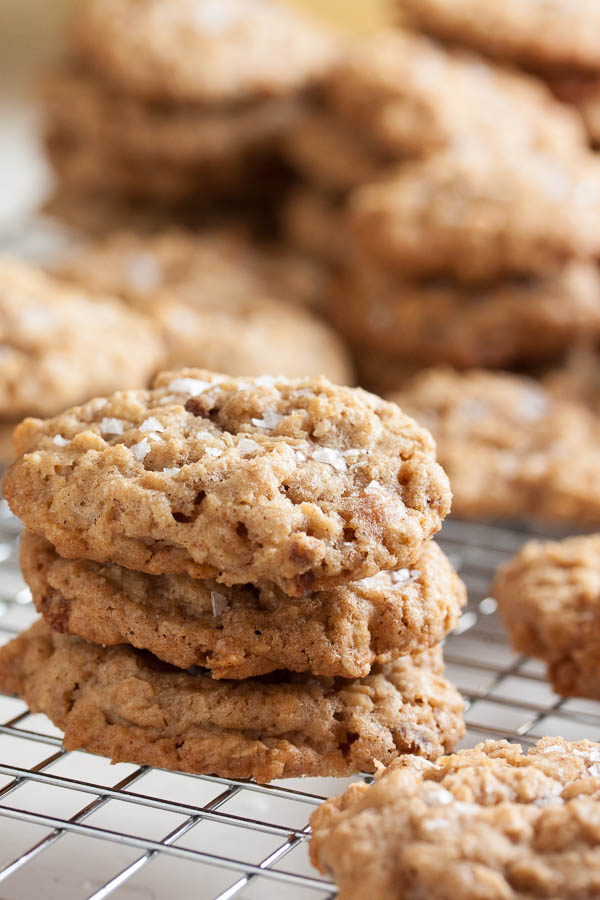 Guess who just got a couple new cookbooks! I’m ridiculously excited. As if I don’t already have a large enough collection, I was browsing Amazon the other day and stumbled upon a book called Cookie Love. Of course I had to have it. And while I was adding that to my shopping cart, The Ultimate Cookie Book popped up in my suggested items. Twist my arm – I guess I had to have them both. I’ll admit, I’ve ordered one or two cookie books over the years that have been a bit underwhelming once I had them in my hands and had a chance to flip through them properly. These two, however, look really promising. Cookie Love is full of unique recipes and flavour combinations, while The Ultimate Cookie Book is a huge collection of traditional recipes and twists on old favourites. I’m looking forward to baking my way through both of them. I already have lots of recipes flagged, but I decided to start with this oatmeal salted caramel cookie. I’m a huge fan of both oatmeal cookies and salted caramels – combining the two sounded amazing.  END_OF_DOCUMENT_TOKEN_TO_BE_REPLACED 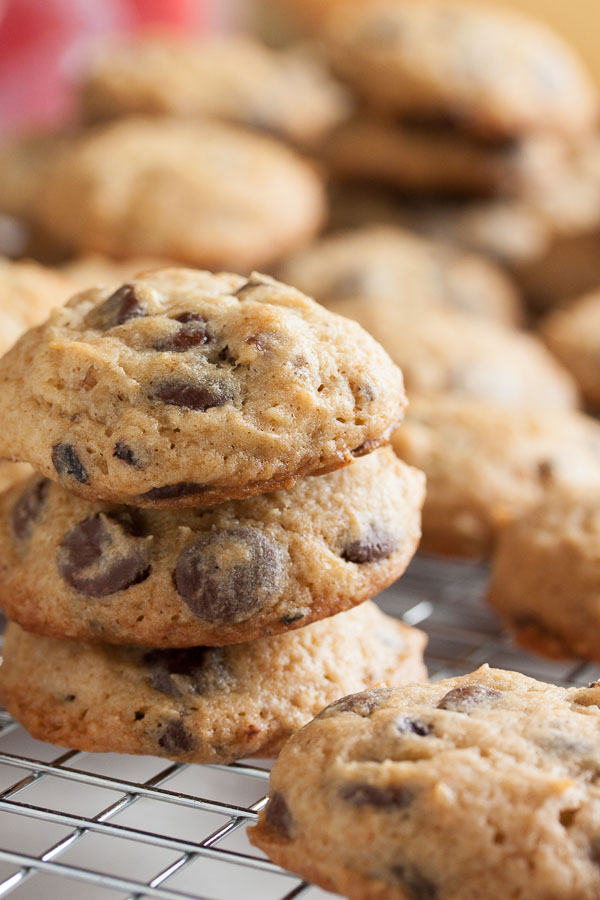 Whenever I flip through my cookbooks trying to decide what to make each week, I always have a hard time narrowing it down. There are so many cookies that I want to try. Often it simply comes down to which recipe I have the ingredients for. A couple weeks ago, I came across this recipe for sour cream chocolate chip cookies. Now doesn’t that sound amazing? I would have made them right away, but of course I didn’t have any sour cream. That’s not something I usually have on-hand. So I added it to my shopping list and found something else to make instead. So this week, I was all set to make them! Imagine my surprise when I gave the recipe a more thorough read-through and saw that it also calls for raisins. Which I also don’t have. I still haven’t bought any since the last time I needed them and had to substitute currants because I didn’t have raisins. Oops. I really wanted to make these cookies, though, so I decided to just skip the raisins altogether and increase the amount of chocolate instead. Sound like a good compromise? I thought so.  END_OF_DOCUMENT_TOKEN_TO_BE_REPLACED 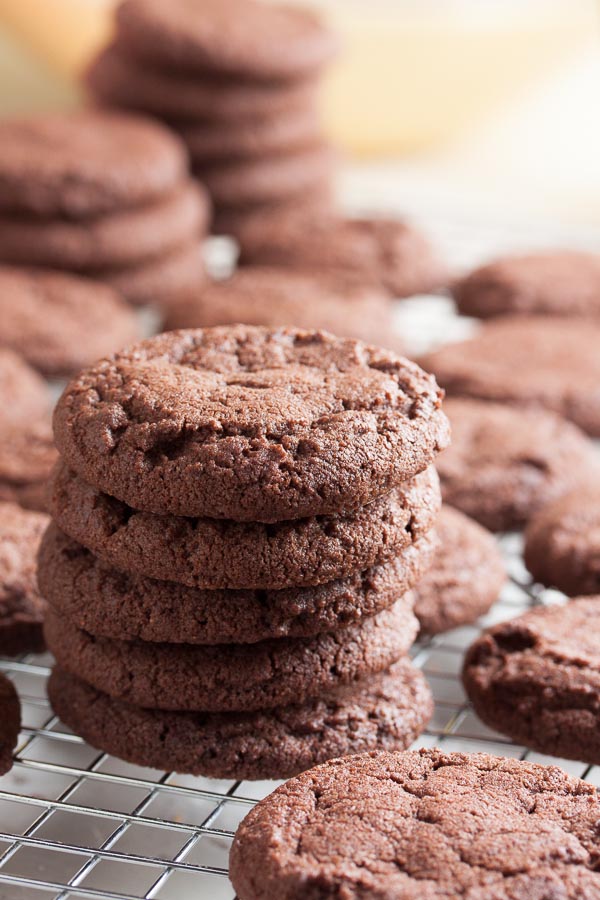 After making the chocolate biscotti a few weeks ago, I realized I haven’t been making many chocolate cookies lately. Oh, they’ve definitely had chocolate in them, but they haven’t been primarily chocolate. And as a chocoholic, I decided that needed to be fixed. So this week when I was flipping through recipes, trying to decide what to make, this one really jumped out at me. A nice simple sugar cookie, but a chocolate sugar cookie. Oh yes please.  END_OF_DOCUMENT_TOKEN_TO_BE_REPLACED 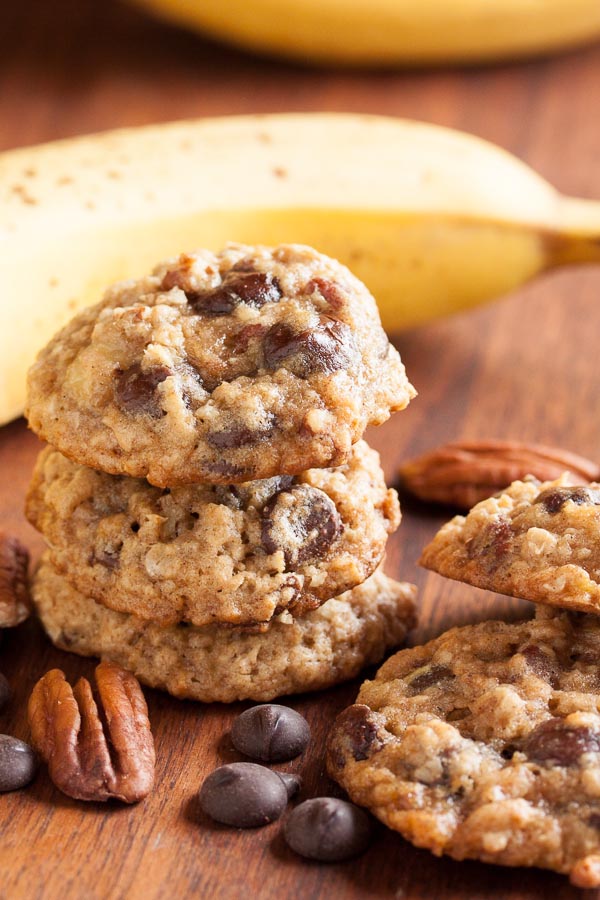 This week I found myself with some bananas that were just a bit past their prime. They’re usually way too green to eat when I buy them, so I set them aside to ripen (as you do). And sometimes I forget about them. Oops. Like this week. By the time I noticed them, they were way too ripe to use in my smoothies as I’d planned. So new plan. I made a couple batches of banana walnut muffins for myself (they freeze really well), and had just enough left over to make some banana oatmeal cookies as well. So everybody’s happy!  END_OF_DOCUMENT_TOKEN_TO_BE_REPLACED 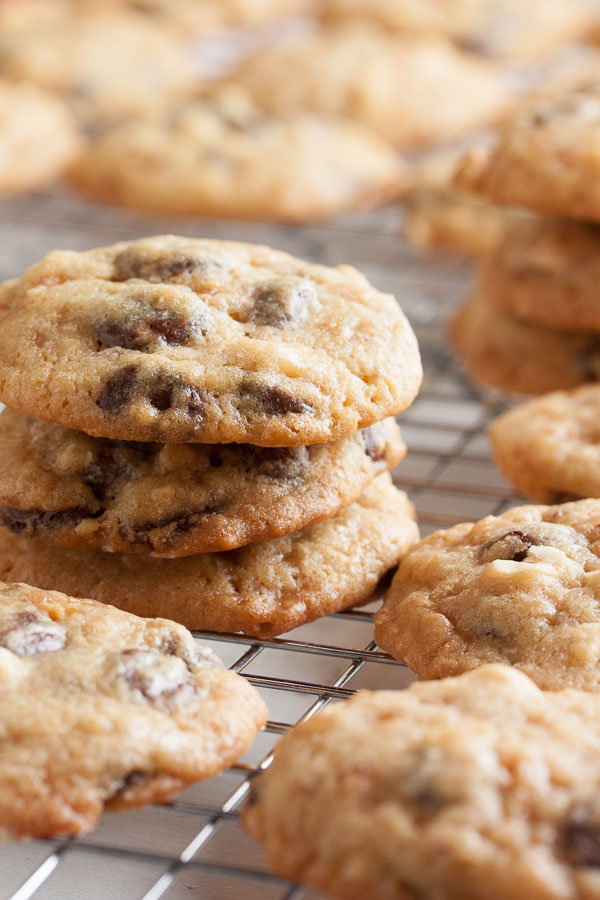 This week’s cookie was originally called “candy bar cookies”. Doesn’t that sound awesome? With a mixture of chocolate, toffee, and peanuts, it definitely does remind me of a few candy bars I’ve had. I think if you’re really wanting that “candy bar” flavour though, you’d be better off using milk chocolate chips instead of semisweet. But for cookies? I definitely prefer the semisweet.  END_OF_DOCUMENT_TOKEN_TO_BE_REPLACED 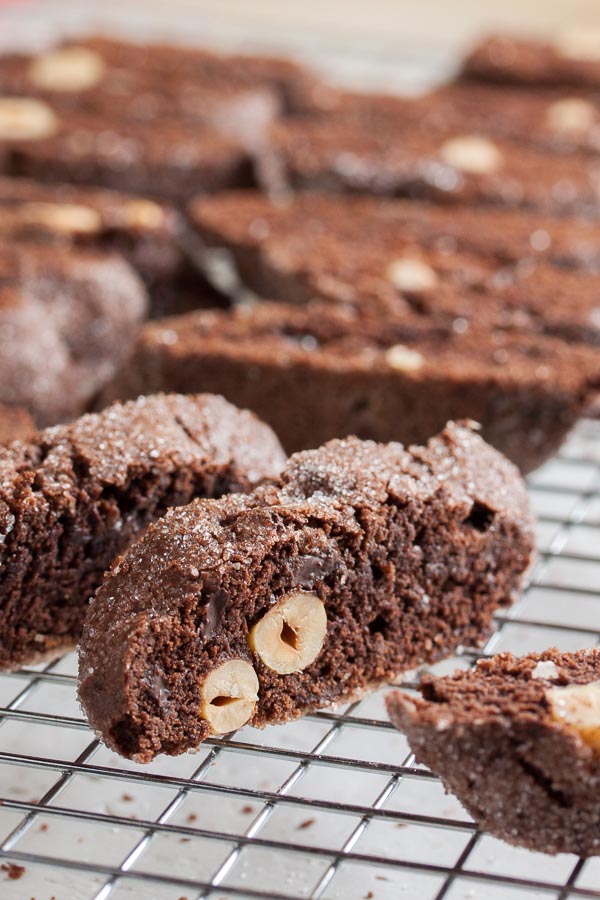 I feel like I’m getting into a bit of a rut, cookie-wise. Work has been pretty busy for me lately, and come Sunday afternoon when I start thinking about baking something, I’m usually tired and wanting to make something simple. Roll-out cookies? Nah. Let’s make chocolate chip drop cookies again! I’ve made so many variations of chocolate chip cookies, and peanut butter cookies, and oatmeal cookies. And there’s absolutely nothing wrong with that – everyone loves those cookies! They’re all definitely big crowd-pleasers. But I’m getting a bit bored. So while I still wanted something simple, I did want something a little different. And then I realized it’s been a reeeeally long time since I’ve made biscotti. In fact, I haven’t made any since the lemon pistachio biscotti I made a almost three years ago. Yikes! That’s been way too long.  END_OF_DOCUMENT_TOKEN_TO_BE_REPLACED 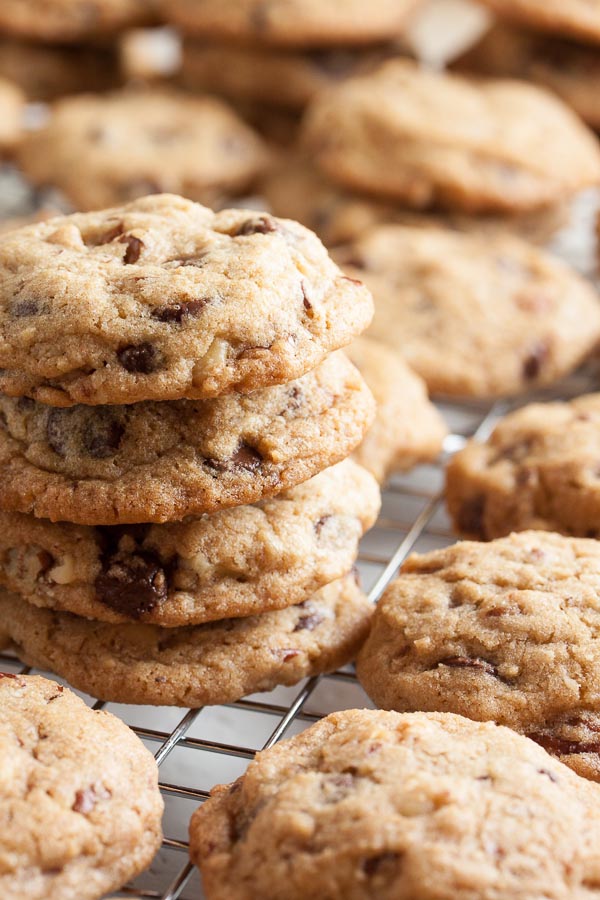 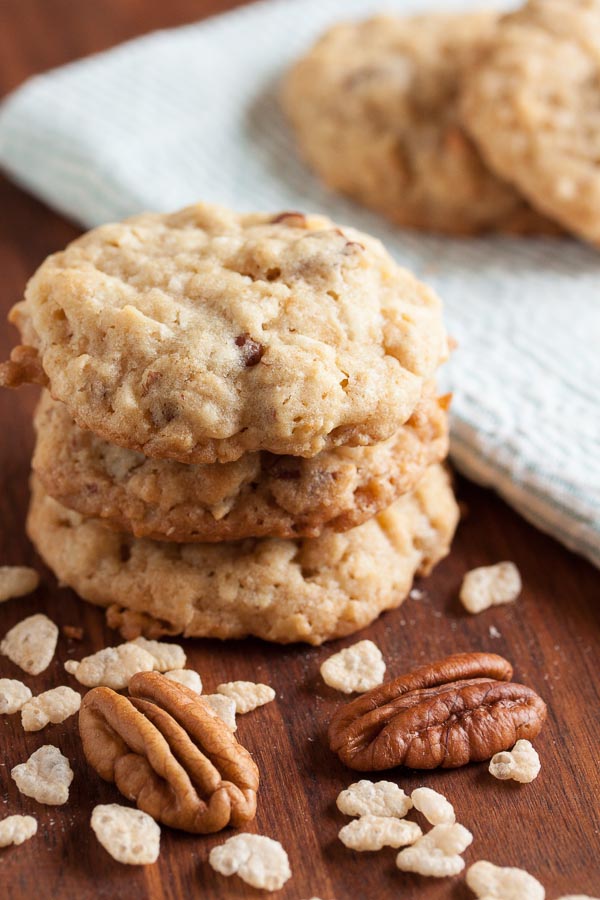 I know what you’re wondering. How can a chewy coconut oatmeal cookie be crunchy too? I’ll tell you – with toasted pecans and (wait for it…) crispy rice cereal. Yup, you read right – rice cereal. This combination is a big hit, and people are being blown away by that secret ingredient. One of my friends was eating one while chatting with me, and every time she took a bite, she stopped talking and looked at the cookie. Until she finally broke down and asked what gave them their texture.  END_OF_DOCUMENT_TOKEN_TO_BE_REPLACED 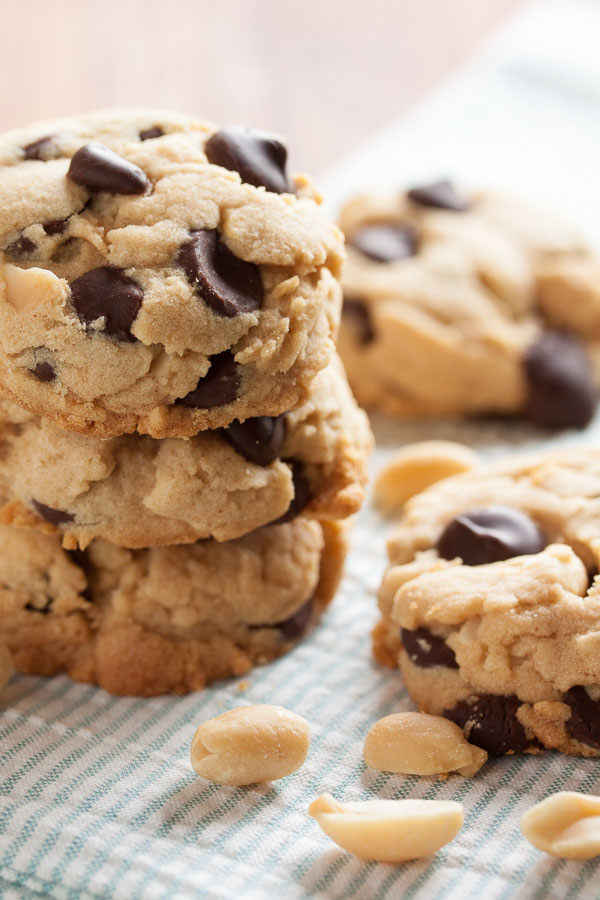 I was feeling lazy this weekend (again – it’s a problem, I know!) and just wanted a nice simple cookie to make. And honestly, I was kinda craving something nutty. I’ve made a lot of peanut butter cookies over the years – with and without nuts, with and without chocolate chips – but this one simply called for “nut butter”, not specifically “peanut butter”. I really would have liked to try them with something different like almond butter or cashew butter, but it was Sunday afternoon and the only nut butter I had on hand was good old peanut butter. Oh well. Not as exciting as I was hoping, but I promise I’ll try these again with a different type of nut at some point in the future, because I really would like to see how they turn out. Because with peanut butter? They turned out great.  END_OF_DOCUMENT_TOKEN_TO_BE_REPLACED 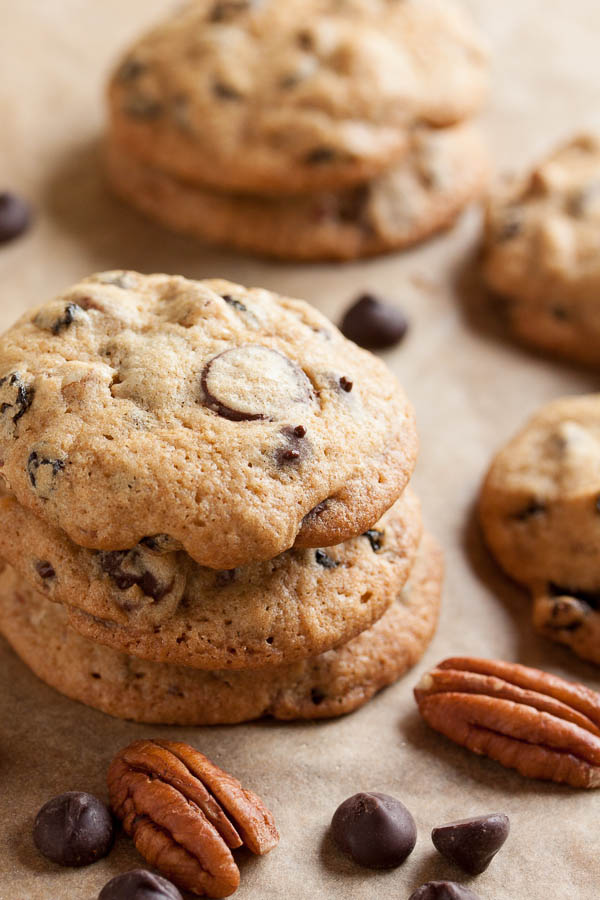 Okay I’ll confess, I’m not a huge fan of raisins in cookies (gasp!!). I know, I know. Who is, right? It’s definitely not just me – I’ve seen people getting excited at the thought of chocolate chip cookies only to immediately hang their heads and wander away when they realize they’re actually raisin. Raisins get a bad rap. I can remember getting the little boxes of them for halloween when I was a kid and being so disappointed. While I do bake with raisins occasionally, usually when I see them called for in a recipe I’ll substitute dried cranberries instead. Because cranberries are delicious. But this time I saw a recipe that called for raisins and I decided to force myself to try it as-is. Why? Because this is actually Martha Stewart’s famous Ne Plus Ultra Cookies recipe. And I’ve heard amazing things about this cookie.  END_OF_DOCUMENT_TOKEN_TO_BE_REPLACED 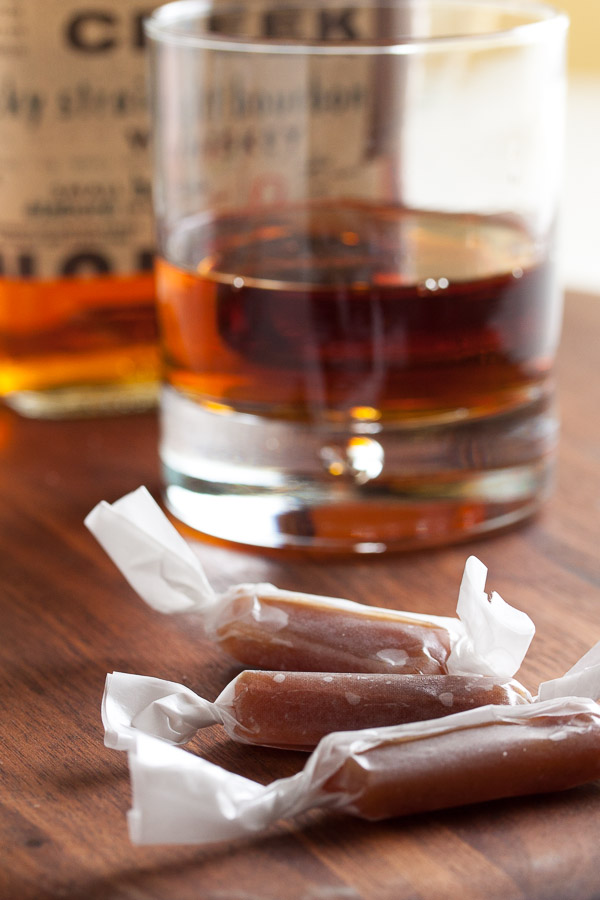 I seem to go through cycles with caramels. I don’t make them often, but once I start, I want to make them again and again. For one thing, they’re delicious (duh). And for another, they’re not nearly as difficult as you might think. Well it’s been awhile since I’ve made them last, and I wasn’t really thinking about making any now, but I was browsing recipes online (as I do), and came across a recipe for some bourbon caramels. Oh my. Doesn’t that sound like a good combination? So now I’m thinking about caramels, and I can’t even remember the last time I made them (I seriously had to look it up – and it was the spiced maple walnut caramels I made a year ago). Way too long, right? Definitely time to remedy that.  END_OF_DOCUMENT_TOKEN_TO_BE_REPLACED